Ahoy, mateys… Stevie Wayne’s mellifluous tones broadcast out from “KAB, Antonio Bay” to keep listeners company through the witching hours in John Carpenter’s classic ghost chiller, The Fog. The small radio station is set in a lighthouse on a steep rocky outcrop that looks like it’s perched at the edge of the world; nothing beyond but sea, sky – and whatever lurks between them…

It must have been some time in the late 90s, or very early 2,000s that I learned (whilst listening to the commentary track on the special edition laserdisc of the film) that the lighthouse in question was situated at Point Reyes peninsula, in the national seashore park north of San Francisco. In 2002, I got to see it for myself; I won’t say that I traveled to San Francisco just to see the lighthouse – there were other things (including a desire to scope out locations from Kerouac novels, an open air show by Dream Theater at Concord pavilion – and just the desire to get away from my office to some fresh air and seaside whilst still enjoying what a major city has to offer) that led me there. However, it was certainly  a distinct selling point that helped seal the deal.

Thus it was that early on a bright, sunny morning in August 2002, I found myself with the top down on a convertible, heading through the A/C like chill hanging over the Golden Gate bridge and on out to Point Reyes National Seashore Park. I stopped a little while at the visitors’ center, but only for a quick browse; by that point, the lighthouse was beckoning me.

The drive out to the lighthouse takes you through fairly archetypal coastal scenery – hardy grasses on rolling ground, dotted here and there with animals; there are some establishing shots in the film of Stevie Wayne driving out to the station, but none that I could identify the locations of precisely enough to stop and view. There are other notable visuals – such as a big, leaning cypress tree that is also there to be found – but at the time I didn’t think to look for it.

The last approach to the lighthouse leads you to a smallish car park; from there it’s a short walk up over a rise – with the target only then finally hoving into view.

Obviously the first thing you really see, as well as the lighthouse itself perched down below you, is the long flight of steps descending down: 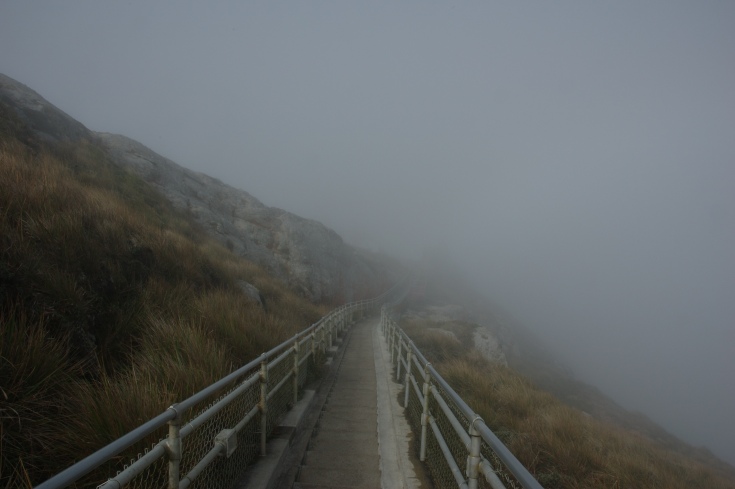 (At this point, I’m going to interject the fact that actually, I’ve been to the lighthouse twice now – the first time in ’02, and then again in ’07. On my first visit, the day was clear and sunny, and you could immediately see the lighthouse as you approached. The second time, however, I encountered – what else – fog; and since that feels much more appropriate, the pics here are from the ’07 visit.)

There are rest points on the way down/up the steps, if you require them; I have stopped in them, but only really to take photos – and to take in the fact that I was here; that KAB was right in front of me. (This was quite an early strike in my movie location scouting; and because it is both from a genre film, and quite off the normal beaten tourist track – i.e. it’s not like seeing the Ghostbusters building in NYC, which millions of people do every year, whether they know it or not – it felt quite surreal to be there.) 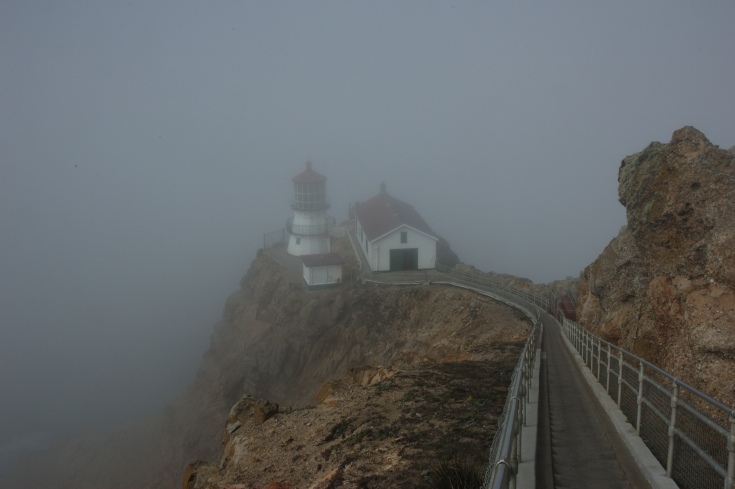 Another instantly noticeable thing was the fog horn sounding out across the sea; the same mournful tone that drifts in across the bay and into town during the film. It looks as though the one that’s there now is of a more recent vintage – compare the roof of the building below with the header image to this post showing the building as it appeared in the film: 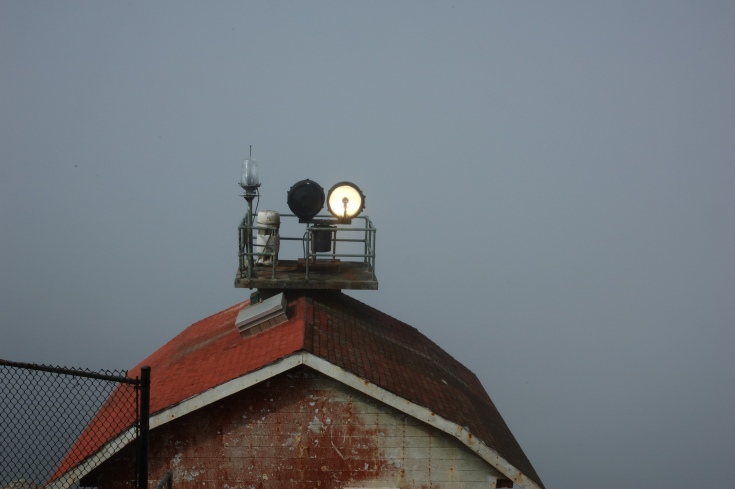 Nonetheless, the sound alone drifting through the fog was massively evocative; I closed my eyes and just listened, imagining Blake and his cohorts drawing ever closer…

Once you reach it, the lighthouse itself is somewhat smaller than you imagined it to be; clever film making (and Carpenter’s early works are an absolute masterclass in sliding between an establishing shot and a soundstage set whilst maintaining absolute willing suspension of disbelief) has you imagine the roomy radio studio still perched on top, whereas in reality what you find is more compact and functional, but no less lovely for it.

So there you had it: KAB, the fabulous 1340. It was a long while before I could tear myself away from it and back up the steps; and I did so with a warm glow of accomplishment and happiness.

Suddenly, out of the night, the fog rolled in. For a moment, they could see nothing; not a foot ahead of them.